Sophia Steckeler, born in Munich in 1984, studied the harp with Prof. Helga Storck and Cristina Bianchi in Munich where she finished her final examinations in 2010 with distinction. Prior to this she studied for one year in Paris with Prof. Isabelle Perrin and also accepted the invitation to study on Erasmus with Prof. Fabrice Pierre at the Conservatoire National Supérieur de Musique et de Danse de Lyon. Masterclasses with Marie-Pierre Langlamet , Charlotte Balzereit , Xavier de Maistre, Catherine Michel und Sarah O`Brian followed.

She is the prize-winner from several competitions such as „Jugend Musiziert“, the Concours Internationale de Mondidier and the London Royal Academy Competition of Music.

Since 2011 Sophia Steckeler is the principal solo harpist of the Monte-Carlo Philharmonic Orchestra. She previously held the same position in the European Youth Orchestra, the Bundesjugendorchester and the Bavarian Symphony Orchestra where she played in concerts with conductors such as Mariss Jansons, Lorin Maazel, Riccardo Muti and Esa-Pekka Salonen. 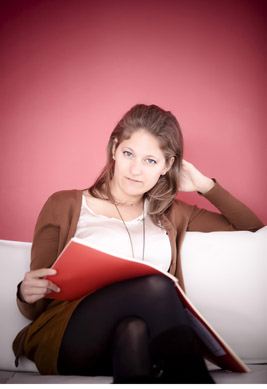