Theresa Steckeler was born in Munich of a musical family.

She studied with Prof. Gaby Pas-Van Riet in Saarbrücken and with Prof. Stephane Réty in Dresden at the Carl-Maria von Weber Musikhochschule. Here she passed her final Masters examinations in 2011 with Distinction. In addition she attended several masterclasses with Andrea Lieberknecht, Henrik Wiese and Patrick Gallois.

From 2009 to 2012 she was the principal flutist of the Göttinger Sinfonieorchester as well as in the Opera Theatre of Landesbühnen Sachsen. Since 2015 Theresa Steckeler is the Solopiccolo player of the Lucerne Symphony Orchestra. As a guest she is regulary invited to give concerts at the Zürich Chamber Orchestra, the Symphonie Orchestra of Bale, the Südwestdeutsche Philharmonie Konstanz and the Philharmonie of Monte-Carlo. 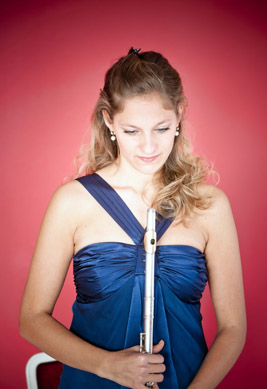