The twin sisters Theresa and Sophia Steckeler, born in Munich, Germany, in 1984, are members of  a  family of professional musicians. They started to learn an instrument when they were five years old.

Before their serious professional studies began they had already commenced their chamber music careers. They attended master classes in France and Italy with Cristina Bianchi, Eduard Brunner, Fabrice Pierre and Gustav Rivinius.

At the International Music Competition of Koblenz 2009 they were awarded first prize. They also won first placement by the audience.

The enthusiasm for this special instrumentation and positive audience reaction led them to give guest performances in numerous renowned concert series such as the Oberstdorfer Musiksommer and the World Harp Congress in Geneva. 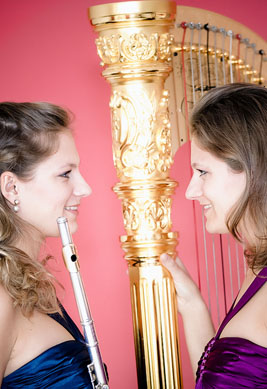